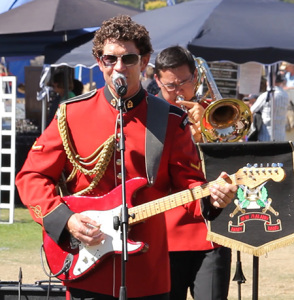 Mark McKenzie is an international touring musician, recording artist, and guitar teacher. His on-line video lessons have been viewed by over 3 million people. And with 38,000 subscribers, his YouTube channel (theguitarguychannel) is one of the fastest growing in the guitar lessons space.

Mark was born in 1973 and raised in Christchurch New Zealand where he spent his early teens learning guitar and perfecting his craft. Early on he was influenced by anything guitar related he found in his parents album collection: The Shadows, Simon and Garfunkel, The Hollies, John Denver, Peter Paul & Mary. His first album was Jeff Beck’s Blow by Blow. He loved all of the eighties guitar heroes.

But it was Mark Knopfler of Dire Straits that inspired him to take the instrument more seriously. And so began an earnest practise regime where he kept a journal of how and what was practised clearly showing his progress.

At 18 years old he joined the ‘Royal NZ Army Ordnance Corps’ and a year later, successfully auditioned for the NZ Army Band (NZAB) as their first full-time guitarist. He spent the next eight years playing guitar professionally in a variety of styles including Swing, Rock, Pop, Latin, Jazz and also playing percussion in the brass band ensemble.

In 2005 he left the Army Band to pursue his own musical ambitions and to teach guitar. Starting his own guitar teaching business, he built up a solid base and reputation locally as a tutor. He also spent nights gigging in various pubs, clubs and functions with an assortment of bands.

In 2009 he was asked to rejoin the NZAB and is currently still working with them on a more casual basis. He is actively involved in several covers bands, has a solo act and is currently working on his first solo album to be released soonish.

In 2013 he started posting video lessons on YouTube and soon found his lessons were attracting an audience. In just two years his channel went from having just a handful of followers to having 38,000+ subscribers.

Mark’s success as an on-line guitar teacher can be attributed to his love of teaching. He especially loves teaching beginners for the thrill of seeing people transform from knowing very little to playing with confidence.

In his downtime, he has co-written and recorded with local bands, collaborated on musical projects with friends, and more recently was a contestant in the New Zealand X-Factor competition.

He enjoys living by the Pacific Ocean and surfing.