I’ve often wondered what goes into making an amp or FX pedal. To me it’s all just wires and knobs and it’s often easy to gloss over the science behind the sounds.

One man who has always been interested in the science is James brown – no not the smooth moving soul funk meister, but the Chief Engineer for Kustom Amps and the owner of Amptweaker – a personal company that allows Brown to pursue his passion for handmade pedals and custom amps.

Where his site differs from the usual offerings of Amp and FX pedal makers, is that he takes his inspiration from customers. Only once an idea gathers enough support does he begin making the unit.

He’s come up with a range of pedals so far and his latest offering, released during the Summer NAMM, is the TightRock which came as a response to customer requests for a pedal in between two of his previously released pedals the TightMetal and the TightDrive. It was met with a lot of positive feedback from Artists and users alike at the NAMM show and is sure to feature in many people’s pedal collections. 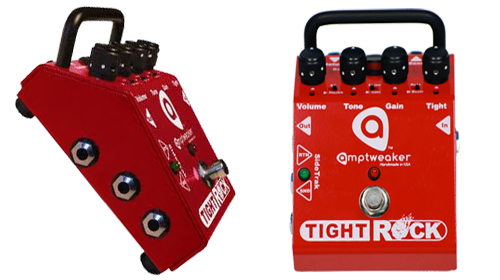 The unique routing options mean you can loop a separate FX unit into the TightRock which is on when you stomp on the TightRock and colours the TightRock’s distortion. Not only that but with the TightRock’s SideTrack function, you can send the guitar signal to another FX pedal which can color the amp’s clean channel, turning a single channel amp into a 3 channel amp. These are just some of the options available to the user.

Learn more about the pedal from Brown himself as he cranks out some sweet sounds and explains the possibilities that come with the TightRock.