Eddie Van Halen was born in the Netherlands in 1957, his brother Alex was born two years earlier in 1955. They, along with their family emigrated to The United States in 1965. They belonged to a musical family and both were trained to become concert pianists. However growing up in California exposed the Van Halen brothers to popular music and soon they wanted to become rock stars. Initially Eddie wanted to play the drums and Alex the guitar; however Eddie’s paper route interfered with his practice and his brother quickly became better on the drums. With his older firmly ahead of him in drumming ability Eddie chose to learn the guitar. 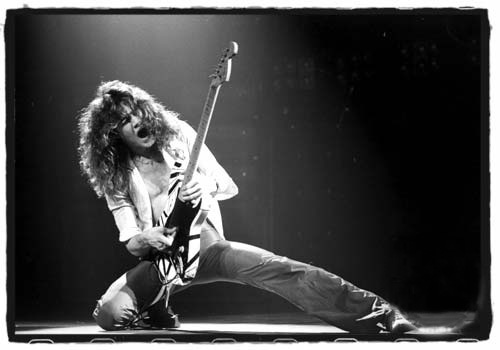 After high school had finished the boys played gigs in and around their home town of Pasadena, CA. It was on this circuit that they meet singer David Lee Roth and bassist Michael Anthony who along with the brothers made up the quartet that would become Van Halen. While playing in a club in L.A., Van Halen was spotted by Gene Simmons. Simmons wanted to produce a demo for the band, but unfortunately the demo flopped and was rejected by all the major studios. However a year later at the same club Van Halen was spotted by a producer from Warner Records. He signed them on the spot and soon after in 1978 Van Halen’s self titled album was released. The band had a string of platinum records until 1985 when rifts in the band forced Roth to leave the band.

However the bands momentum couldn’t be stopped. They quickly signed new singer Sammy Hager and the juggernaut that Van Halen had become, continued.

Hager was with the band for 11 years and this period saw one of the bands albums (5150) go to number one, which was a first for the band. In the late 90’s Hager quit and Roth returned briefly for the release of the bands Best Of album. But time had not healed the wounds and Roth was quickly replaced by Gary Cherone, the former front man for the band Extreme.

It is through the band Van Halen that the musical genius of Eddie Van Halen has been exposed. His wild style electrified audiences and created a legion of guitarists keen to mimic his playing. The most commonly referenced song when people talk about Eddie Van Halen is Eruption. Eruption is well known for its distinctive introduction which includes the most well known example of double handed tapping. This technique involved Eddie using both his right and left had to fret the guitar, and using a tapping motion to make the guitar sound out.

This technique was not new, some players had experimented in the 1950’s but Eddie Van Halen redefined the technique. He added speed, accuracy, distortion and a box full of various effects to the mix creating a style that would become an essential tool of rock guitarists for years to come. Also the popularity of Van Halen’s guitar based, solo laden rock caused many other bands to copy their style. It caused a period in music where nearly all popular rock music displayed some degree of virtuoso soloing. This musical trend has been heavily influenced by Eddie Van Halen’s guitar playing.

And here is a more recent live version of “Eruption” (Seattle, 2007); published by Youtube user TeamDZ:

Hope you enjoy it as much as we do!

Learn more about Moses Robbins on his Google profile.