If you’ve ever found yourself in a situation where having your guitar with you to practice or warm up on just wasn’t possible, the Shredneck might solve that in future instances. Touted as the ‘ultimate practice and warm up tool for guitarists’ if frees you from the need to have your ‘full sized’ guitar with you at all times.

It’s small enough to tuck into your bag and whip out on the train, bus, at the office, in front of the TV when you have a moment to spare to work on your guitar techniques. Kitted out with strap knobs it also allows you to warm up when gigging so you’re ready to rock when it’s time to go on. 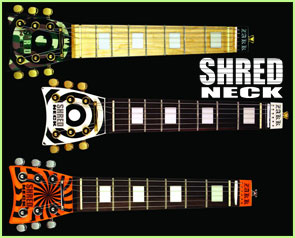 While it does have tuning pegs, they’re not intended to be used like those on a standard guitar. Instead, you use them to alter the string tension to replicate the feel of your guitar in effect allowing you to practice on your guitar without actually having your guitar with you.

This headstock also doubles as the body of the guitar so you can grip the Shredneck, keeping the neck steady while you practice your licks. As you can tell it’s not your usual guitar but with the first 7 frets of a guitar neck, you’ll have plenty to work with.

The guys at Shredneck are passionate guitarists and as such don’t make claims as to any medical benefits of using the Shredneck – as other ‘hand exercisers do’. Instead they see it as the closest thing to playing the guitar without actually playing the guitar. With the ability to always have a guitar on hand, you can continually work on your playing techniques to increase your effectiveness when it comes time to play the real thing.

Check out this video to see Sonny Lombardozzi run through some exercises he uses on the Shredneck to stay primed.