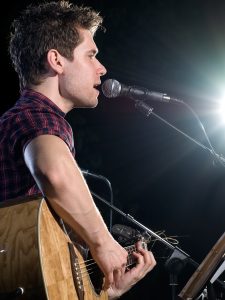 Have you mastered some nice chords and are able to play rhythmic patterns fluently? Well done! Now, are you able to sing and play at the same time? Probably most, well, some of you are, but there are heaps of rhythm guitarists out there that are having problems doing both things at the same time and yes, if you think about it, singing and playing the guitar at the same time is not an easy thing.

Put it this way, you have to be able to play chords and change between them, so finger independence is a must have. You also have to strum with your other hand, and strumming is not an easy thing, not if you want to sound good. Then, you have to sing words which most of the time are following a different rhythmic pattern than the one you are strumming and most importantly, you have to sing in tune… hard eh?

How can you improve or start learning this ability? The first and easiest thing to do is to decide whether you wanna only be a guitarist or a guitarist who also sings. If you say YES, I WANNA SING! I WANNA ROCK! go grab your guitar, pick a VERY SIMPLE song with easy chords and very rhythmic and of course, a song that you know the lyrics to.

If you are having problems picking a song, go for what’s popular, a song that everyone knows or recognizes, it doesn’t matter if you hate it, you are doing this to learn to sing and play but the more familiar you are with the song, the easier the process will be, so keep this in mind.

If you want my advice on what songs could be easy to learn, some songs from Oasis or Nirvana could be a good start, also Johnny Cash has some pretty simple yet beautiful songs and of course The Beatles, but again, try to go with what’s familiar to you.

Once you have picked a song, start by learning to play the intro to familiarise yourself with the chords, the progression and the strumming pattern. Once this is mastered go on to the chorus and try to sing it. Simple and easy!

My advice is to try playing it section by section, DO NOT try to play it from beginning to end, go only for the chorus or the verses, then stop and start those sections all over again. Of course, try to do it slowly, especially if you are having problems with the chords or progression of them, basically take your time! Once you are comfortable with the verses, play it for 4 or 6 rounds and then try jumping into the chorus and repeat the process.

A good thing to do just to have a break is to stop singing it, so just keep playing the song with the guitar a couple of times and then start singing again, this will give you a better feeling of how, when and where to start singing it.

Something very important to be aware of is that you are basically studying a song, so you need to learn the lyrics and of course how the song goes on the guitar, so always stay focused and be patient.

Down the track when you’ve mastered a couple of songs, you should start thinking about a repertoire. There are many ways to do this, you can do it by choosing what people wanna hear, basically what is popular out there; you can also create your repertoire based on what you would like to play or what songs you like and of course another way to do it is by going with what’s easiest for you, which is not a bad choice if you are just starting to learn guitar and also to sing.

For those guitarists out there who are not sure whether to sing or not to sing, remember that singers are the star of the band; a drummer can be awesome as well as a guitarist or a bass player but let’s face it, they always get overshadowed by the singer. It’s sad but true. People always look at the singer, even if the singer sucks!

Look at Jimi Hendrix, he was a guitar master, he also sang but he wasn’t that good and he knew it. But he also knew that by doing it he was going to get a lot more recognition than he would’ve staying in the background simply doing guitar solos – good move Mr. Hendrix!

Keep all these things in mind and start having a go with singing and playing at the same time. If you already can do it, we would love to see you performing, so feel free to share any of your videos.