There are many elements that determine the sound quality of any acoustic or electric guitar. Leaving off issues of pickups and other hardware, it basically comes down to the types of wood used and the finishes applied. In fact, some say that the final sound of any guitar can be estimated before it is built just by careful choice of wood, and that the finish of the guitar will have an effect on its sound. 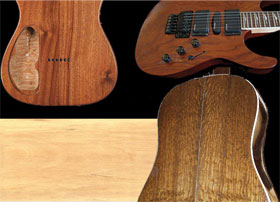 While this is an oversimplification, it is for the most part, accurate. When making electric guitar bodies, woods are traditionally maple, ash, mahogany, alder and basswood, but others, such as koa, walnut and bubinga may also be used. For acoustics, the wood of conifers such as spruce are preferred for the tops, while rosewood and mahogany are most often used for the back, sides and neck. Maple and mahogany have a lot in common, both being medium-hard to hard timbers. Basswood, on the other hand, is relatively soft.

The typical “Les Paul” sound is created by a mahogany neck and body with a maple cap (often with dramatic figuring called flame or quilt, depending upon how the wood is sawn). The fingerboard is usually either rosewood (Brazilian or Indian) or ebony. These guitars can be quite heavy. Meanwhile the typical Fender Strat or Tele sound is the result of a maple neck and a body usually made of either ash or alder. A maple fingerboard will result in a slightly brighter tone than one made of rosewood, but it usually comes down to which wood a guitar player prefers, as rosewood looks and feels quite different than maple. Laminated bodies are also available, drawing on the sonic characteristics of both light and heavy woods.

A lighter weight wood such as alder or mahogany is used for the core and a dense piece of wood such as maple or zebrawood is laminated to the top. A perfect example of this is a Gibson ES-335. There have also been many forays into the use of man-made materials, such as carbon graphite and carbon-fiber composite to reduce weight and improve tonal stability. Once a guitar is built, it must be finished, meaning a clear, protective coating applied to the wood, often along with stains. In the 1920’s, nitrocellulose lacquer became prominent with guitar builders such as Martin and Gibson because of its relative ease of application and fast drying time.

Some manufacturers continue this tradition, while others, like Paul Reed Smith, may add a clear acrylic urethane top coat. Another option is to apply multiple coats of polyurethane. Fender has begun using acrylic lacquer in a high-gloss finish is used to capture the look and feel of guitars manufactured in the 1940s and 1950s. To obtain their signature high-gloss, jewel-like finishes on models like the American Series Stratocaster, the company uses a two-component polyurethane coating that resists moisture, chemicals, yellowing and damage from marring. For many of their colored finishes, the company uses specially formulated Sherwin-Williams acrylic lacquer, followed by three clear coats.

New low gloss satin finishes, which feel more organic and are less reflective onstage are beginning to become popular. Many companies, including Godin and PRS, already finish all or some of their guitar necks in a low gloss satin. Modern catalyzed polymer wood finishes have been developed to satisfy the factory’s need for expedient production and the consumer’s need for durability. These finishes are available in the same variety of colors and gloss as nitrocellulose lacquer.

Check out this video from Wicklund Guitars Youtube channel.

This video shows John Arnold, a professional classical and steel string acoustic guitarist, playing a fingerstyle version of “Yesterday” on five Wicklund guitars. The first is a birdseye maple OM, the 2nd is a claro walnut OM, the 3rd is a claro walnut Dreadnought, the 4th is an E. I. rosewood Dreadnought, and the 5th is a palo escrito OM. Have listen and see if you can note the difference between each guitars wood and its sound.