The only guitar fit for a King!

Who watched the movie Clambake? (1967) Perhaps not many of you did… I didn’t, but as soon as I found out about the new Fender Elvis Kingman guitar, I went straight to Youtube and found what Clambake was about! 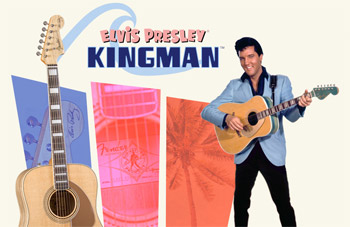 Fender built the King guitars for the first time back in 1963 as part of their “Wildwood series”, naming them Kingman in 1966 and then discontinued the line in 1971. Probably the main characteristic about these guitars was the same bolt-on neck design from their electric models, but for most people this wasn’t a good move as the guitar did not look “acoustic enough”. Besides that, some Fender people say that these guitars lacked tone and volume, which is never a good thing to say about a guitar.

I wasn’t there to see the first edition of the Fender Kingman guitar in the 60’s, but I think I would have been one of the many that did not like the lack of true acoustic looks. But that didn’t seem to put off the King of Rock ´N´Roll and my mother’s hero, Elvis Presley Despite what the critics said about the looks and lack of features on this guitar, he used a Kingman on the 1967 film “Clambake”. Nice one king!

Now coming back to the present, 2012, The Fender team, as part of the Artist Design Series, have introduced the totally new Fender Elvis Kingman. Does it lack sound or tone? Of course not! Does it look more acoustic? Well, if you don’t mind having a Fender Stratocaster headstock on your acoustic guitar, then yes, it looks more acoustic. I am not a big fan of electric headstocks on acoustic guitars, but perhaps it’s just a matter of getting used to it.

Fender kept the Wildwood finish – backs and sides were made from randomly dyed Beechwood achieved by injecting dye into the living trees before being harvested. The guitar features Presley’s signature on the front of the headstock as well as a solid spruce top, maple neck, 20 fret Rosewood fingerboard with block position inlays and a bone nut. The guitar is finished in a natural gloss and comes fitted with Fender Dura Tone Coated 80/20 strings. And a Fender guitar wouldn’t be complete without classic Fender machine heads.

The price is in the low-medium range for an acoustic guitar, but it could vary depending where you get it from $350 to $450 -which is pretty reasonable for a piece of history. Overall, it’s easy on the eye, has a great tone, a warm sound, is extremely playable and it has a unique look! I think that if you were or still are an Elvis fan you should check it out, I know my mum would!

Learn more about Luis Tovar on his Google profile.