“Are you the Mechanic or the Driver?”

A friend of mine (James) dropped in for a visit whilst travelling recently. He’s a fellow guitarist and follower of the ‘Mark TheGuitarGuy’ channel and also the Jamorama.com site. But it was the first time he’s actually been to my home in Christchurch New Zealand. I showed him around the house and his eyes lit up whenever he saw a guitar or amp or even just a guitar case (as there’s usually a hidden treasure inside). After we chatted and did our initial catchup and exchange of what we’d been up to recently, he commented that he was surprised to see so few guitars in my home. He was perhaps expecting my home to be a shrine to fretted delights and musty old tube amps littered about the house in various nooks and crannies. He said “I guess some guys just have all the gear and no idea”…and I thought “Brilliant!…that’s my next blog post” hehehe.

The fact is, I have a handful of guitars and an amp. Each has it’s own use and practical explanation, but aren’t even that expensive of unique or exclusive. 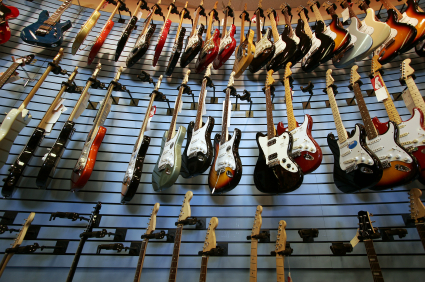 I have absolutely nothing against the guitar connoisseur or collector. It’s just not that big a deal to me. I’ve met plenty of guitar geeks that know the year and serial number to specific instruments and pickup combinations. They take great delight in telling me their amplifier configuration, effect units, pedals and brand names…but I simply switch off when they talk at me…(yes I meant to say ‘at me’).

Most of these guys are actually pretty average guitarists to be honest. If they spent as much time on their playing as they did researching the comparison between open backed and closed backed amplifiers, they’d probably be too busy playing gigs and recording albums to talk ‘at’ me about their setup.

I think of it this way.

In formula one, you have a driver and the car. A team of engineers and clever academic genius types, figure out the car stuff.

The driver gets really good at one thing….driving the car.

You have to decide if you want to be the mechanic, or the driver.

I have friends that know about the mechanics stuff… and they love it! I ask them about my sound, gear, amps, guitars, setups etc….that leaves me time to do what I like to do…play guitar.

It’ll become clear when you ask me “What rig do you use?”…because I’ll say “It’s a guitar with electricity, that somehow makes it louder…and that heavy box over there helps too”…you’ll hopefully be walking away and won’t hear me say “it’s connected with a cord or rope of magic’.

I’m kidding of-course. I’d never be so mean or disrespectful of any fellow guitarist, but I have been pretty blunt before.

So……If you’re the ‘mechanic’ type, fantastic! Acknowledge that, and next time you’re at my gig and decide to come up and tell me about your Guitar/Amp ratios and stats, remember to find out if I’m a mechanic or a driver.

Learn more about Mark McKenzie on his Google profile.