We’ve written about IK Multimedia products in the past and they just continue to set the bar for portable recording software for iOS as well as breaking new ground for DAW (Digital Audio Workstation) software.

As previously mentioned, the iRig interface adapter enables guitarists to plug their guitar into their iPhone and not only apply great sounding effects to their guitar via the FREE Amplitube application, but also record those great sounds.

The VocaLive app for iPad is yet another release, following on from the success of the iPhone version and provides a one stop shop for singers or songwriters. Touted as being the “first professional performing and recording vocal processor for iOS”, the app just oozes ease of use and is packed with essential effects to bring to life your next performance. 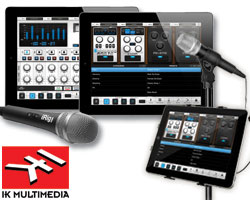 It comes with a suite of 5 dedicated vocal effects (pitch correction, choir hamonizer, voice doubler, vocal morpher and de-esser) that can be applied to your voice in real-time along with a further 7 effects specific to vocal processing (reverb, EQ, compressor, delay, envelope filter, chorus, phazer) that can be combined in a 4 processor chain.

The single-track recorder is expandable to a full 8-track recording studio through an in-app purchase which will give song writers plenty of scope to record new and interesting tracks.

For the novice vocalist, there are enough preset functions to enable you to get up and running quickly leaving plenty of room for more advanced features and effects as you become more familiar with the application and confident with your recording.

VocaLive can be used with the iPads in-built microphone, headphones with a built-in mic or IK Media’s very own iRig mic – the first quality hand-held condenser mic for iOS.

As you will see in the following videos, using VocaLive is both easy and fun to use as well as producing really professional sounding recordings.

With the continuing development of technology and the ability for users to create their own music, VocaLive and applications like it place the tools firmly in the hands of the user to capture their own creativity. There’s little wonder that the internet is bursting with quality user content and there are no signs it will slow down. Have you got yours?